Abenberg Castle towers majestically above the charming town of Abenberg. Once just a modest and quaint accommodation, Abenberg’s lavish counts expanded it during the high Middle Ages to one of the region’s largest castle complexes.

At the time, the area was recognized for its impressive jousting tournaments, renowned poet Wolfram von Eschenbach (1160/80 – 1220) mentioned the grounds in his medieval romance “Parzival”, which can still be visited to this day.

Under the ownership of the Hohenzollerns in the 13th century, the castle was handed over to the Bishops of Eichstätt in 1296, who used it as their center of administration until 1806. The nostalgic romanticists of the 19th century longed for an aesthetic reminiscent of the medieval era, and adorned the castle with several impressive towers.

Today the castle belongs to the Burg Abenberg Association. The castle now encompasses a restaurant and a hotel that accommodates both leisure and business. The impressive region boasts numerous activities for all, from museums to aquatic activities. 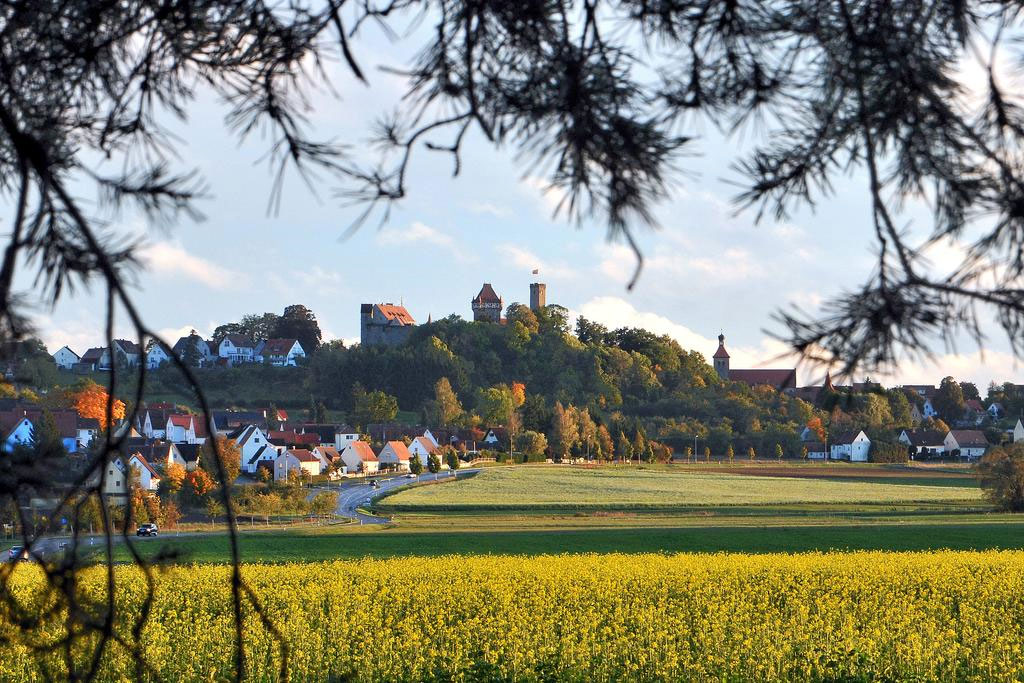 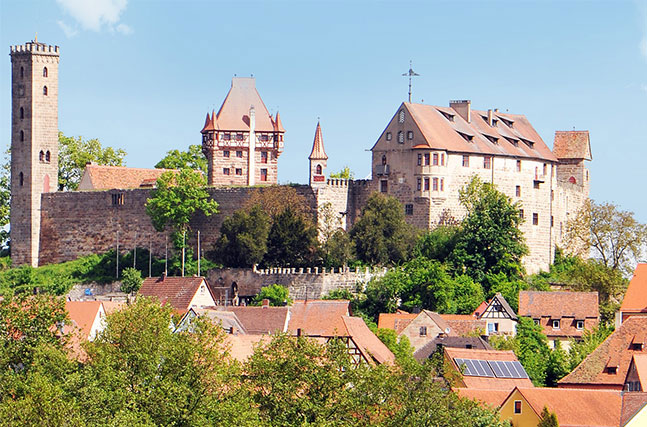 Abenberg Castle lies above the alluring, pleasant town of Abenberg in Central Franconia It is often referred to as the crown of the Rangau.

The history of the Abenberg family dates back to the 11th century. Count Adalbert II (approx. 1040-1059) was responsible for the first rendition of the castle, which was largely built of wood. Count Rapoto (1122-1172) replaced his predecessors’ structure between 1130-1140 with one of Bavaria’s most impressive stone castles (40 x 40m). The Abenberger nobility, whose last count Friedrich II was praised by Tannhäuser for his promotion of poetry, ultimately perished around 1200.[1]

The castle was sold in 1296 to the Prince-bishop of Eichstätt, who overlooked the fortification of the estate’s defense and strengthened the weak north-western corner with a watchtower.

The castle was fraught with a number of costly renovations in the 15th, 16th, and 17th centuries. From 1496, new maintenance buildings were consistently built in the eastern corner and new commercial enterprises were established inside the castle. Increased expenditure ultimately led to the bankruptcy of the castle, culminating in the collapse of the St. Otmars Chapel in 1799.

Due to the increasing secularization of the country, the castle came into possession the Kingdom of Bavaria in 1806, which moved to sell it for demolition. However, the castle’s complete destruction was prevented by Bavarian art dealer KJ Zwerschina, who bought Abenberg Castle in 1875. He oversaw the reconstruction of numerous towers, such as the 33-meter-high Luginsland. The next owner, the distinguished opera singer Anton Schott, continued Zwerschina’s work from 1881-1913. After that, however, the castle once again fell into disrepair.

The town of Abenberg came into ownership of half of the property in 1982, then acquired the rest in 1984. In order to be able to finance renovation and maintenance, Abenberg – in conjunction with the district of Roth and the district of Middle Franconia – founded the Burg Abenberg Association on March 8, 1986, which took over ownership. The Association’s aim was to preserve the castle and to revitalize it culturally, thus establishing a museum and catering business.

In the years following the castle’s acquisition, numerous renovation and expansion works taken place done, ending in 2001 with the opening of the bobbin lace museum. Several excavations were carried out during the renovation works in 1988–1992, which help provide architectural records for the castle’s long and tumultuous history.

Due to ceramic excavations and the discovery of ground marking historian were able to prove the existence of the castle’s original wooden structure, dating back to the 11th century. However, a reconstruction of its arrangement is not possible.

The castle’s stone renovation dates to the 12th century and consisted of a 40 x 40-meter construction. The main building was a free-standing residential tower with a 15.6 x 14.6 meters floor area, mounted in the middle of the courtyard. The walls were 2.5 meters thick and consisted of sandstone blocks. South of the main castle stood the tournament space, which esteemed poet Wolfram von Eschenbach complained about in his medieval romance “Parzival” due to its poor condition. Fascinatingly, it is the only tournament space which can be proven to have laid on the grounds of a Bavarian castle.

Manage Cookie Consent
This website uses cookies to make your visit as pleasant as possible. If you continue to use our service we will assume that you consent to the use of all cookies.
Manage options Manage services Manage vendors Read more about these purposes
View Settings
{title} {title} {title}